For the Companion, head to Bankai Akuma (Companion).

Bankai-Akuma is one of the seven character-specific Akuma Bloodlines in Shindo Life; the other six being Shiver, Satori, Raion, Riser, Shindai, and Sarachia. It is a limited-time Eye Bloodline with a rarity of 1/85. Additionally, it can be obtained from the Ember Hideout Dungeon in the Dungeon Game Mode with a rarity of 1/15. Bankai-Akuma's moveset revolves around damage, stuns, and dodging, making it ideal for PvP.

By holding C, the user can activate Bankai-Akuma's mode, initially starting at Stage 1. The user can switch between stages by holding C and pressing the stage's corresponding number, as long as they meet the bloodline level requirements of the stage. Bankai-Akuma's mode drains 25 MD per second for all stages except Stage 4, which drains approximately 75 MD per second. 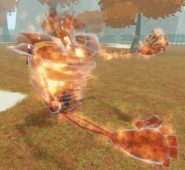 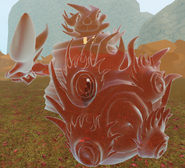