The country covers a vast realm, but is significantly composed of deserts.

The Dunes Village, also known as Dunes as well as The Dunes Sovereignty, is one of the thirteen locations a player can currently spawn at in Shindo Life. It is also one of the six main villages.

The Dunes Village is a large desert village that contains several buildings made from clay and tall trees, surrounded by cliffs of rock, with passage in and out of the village restricted to a single narrow cleft between two cliff faces. There are also multiple pipeline-like structures within the village. Like most villages, the Dunes Village has an office, commonly known as the "Kazekage Office", where players can obtain Execute Missions and rank up. Around the Kazekage Office are several buildings and training logs.

Down the road leading to the Kazekage Office is a Ramen Shop, where players can restore their Hunger. Further down the road is the passage that leads outside of the village, which is followed by a yellow bridge.

To the left of the yellow bridge outside of the Dunes Village is the Dunes Village Arena, which resembles a white ceiling-less dome-like stadium that serves as a battleground for duels between players. It has a few rocks in it, and is encircled by a pipeline-like structure and three buildings. 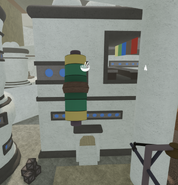