The country's weather is typically cool and the islands are usually covered by fog.

The Haze Village, also known as Haze or The Haze Sovereignty, is one of the thirteen locations a player can currently spawn at in Shindo Life. It is also one of the six main villages.

The Haze Village is a large village that contains cylindrical houses with tall trees growing on their roofs, inter-connected by a network of bridges and ramps. Like most villages, the Haze Village has an office, commonly known as the "Mizukage Office", where players can obtain Execute Missions and rank up.

Down the ramp leading to the Mizukage Office is a Ramen Shop, where players can restore their Hunger.

Near the Haze Village is a temple made of rock, surrounded by trees and having a few training logs nearby.

Right next to the Haze Village is the Haze Village Arena, which resembles a white ceiling-less dome-like stadium that serves as a battleground for duels between players. It has two tall trees inside of it, with two tall cylindrical buildings with trees on their roofs nearby.

The Great Naruto Bridge, which it is commonly known as, is a bridge that connects a small village on a large island with another large island. The village's island is located directly in front of the small island the Haze Village Bridge connects to. 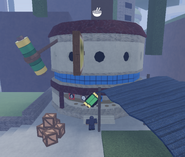