The country is mostly comprised of desolate, rocky areas.

The Obelisk Village, also known as Obelisk or The Obelisk Sovereignty, is one of the eighteen locations a player can currently spawn at in Shindo Life. It is also one of the seven main villages.

The Obelisk Village's buildings are built from the surrounding rock and stone, shaped into tower-like structures that are inter-connected by a network of bridges. Like most villages, the Obelisk Village has an office, commonly known as the "Sovereignty Office", where players can obtain Execute Missions and rank up.

Directly under the Sovereignty Office is a Ramen Shop, where players can restore their Hunger. There are three training logs near it.

Hidden underground in the outskirts of the Obelisk Village is a secret hideout commonly known amongst players as "Kabu-Cobra's Hideout". This hideout has two hidden entrances, one is located behind some grass near a large pit, the other one has a more decorated entrance and is hidden behind some grass on a rock near the Final Valley. The hideout contains a laboratory, a large pit, and a cave with a shrine in it.

The Final Valley, or the Valley of the End as it is commonly known among players, is a large waterfall surrounded by mountains located in the outskirts of the Obelisk Village. 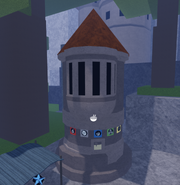